Tracking your borrowing activity using My Library Account in iDiscover

At the start of every month you should receive a BORROWING ACTIVITY SUMMARY email. It should look something like this:

This is nothing to worry about - it is simply a reminder to let you know which books you have out on loan. Although the email shows a due date for the book all your loans will automatically renew and you can keep the books for as long as you need to. Either until you have finished reading them or until the book is requested to be recalled by another reader.

Did you know you can also check your library account via My Library Account in iDiscover. Just go to iDisc

over and login by clicking the link at the top right hand side of the screen: 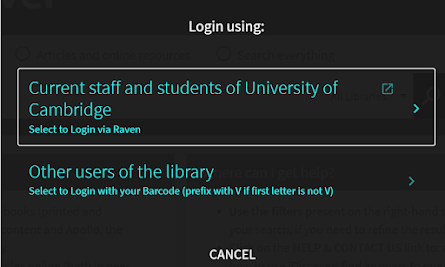 Click on the top box, which says Current staff and students of University of Cambridge select to Login via Raven. If you have not already logged in with your crsid and password you will prompted to do so at this point. Once you are logged into iDiscover you can access My Library Account via the dropdown menu next to your name (top right hand of screen): 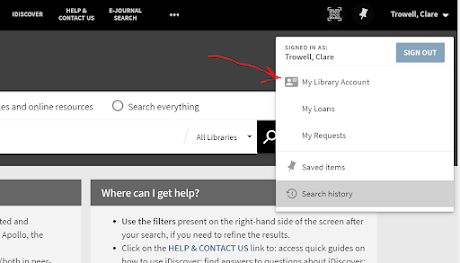 You can, of course, check this at any time convenient to you.

Welcome to the Marshall Library of Economics

If you are a new student, or a returning student who is unfamiliar with our beautiful library, you might want to book a tour and meet us over the next couple of weeks. There are various time-slots available but places are limited. Click here to Book a Tour of the Marshall Library

Alternatively you can watch our one minute video tour here: https://www.youtube.com/watch?v=G5AEaABou0A Everything you need to know about Cambridge Libraries online services, including how to search our catalogue iDiscover can be found on the Library Essentials Libguide. There is a Quick start introductory guide to iDiscover too, which you will have received via your Economics or Development Studies Induction or via your student Moodle page.

We have a Marshall Library Comic to introduce the friendly library team and let you know about our many services, including Click & Collect for borrowing and how to access our live financial data terminals Bloomberg & EIKON: https://www.marshall.econ.cam.ac.uk/contactus/eikon-bloomberg-booking-form 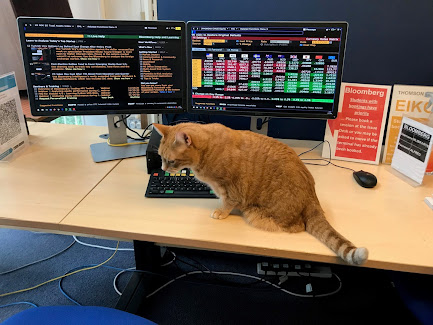 JASPER, Marshall Library mascot, the #EconomicsCat with our Bloomberg Terminal
We look forward to meeting you soon 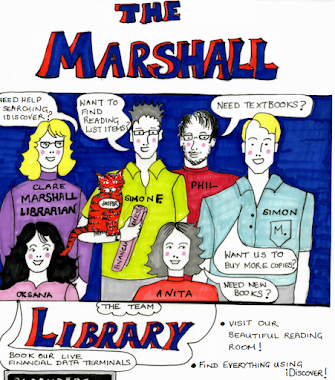 Look out for our famous Tea with Jasper events later in Michaelmas Term too: 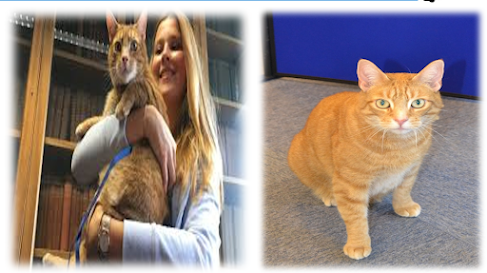 Mary Paley Marshall was Alfred Marshall's wife and the founder of the Marshall Library of Economics, after Alfred's death in 1924. She was the first female librarian and an accomplished economist and scholar in her own right.

In 1871 Mary was one of the first 5 women admitted to Newnham College, where she spent 3 years studying for the Moral Sciences Tripos. Mary and a fellow student, Amy Bulley, were the first women to be allowed to take the men's Tripos. Even though Mary passed all her exams, as a woman, she was not permitted to graduate. Nevertheless she was invited to become the first woman lecturer in Economics at the University of Cambridge and she soon took over the teaching from her former teacher, Alfred Marshall.

In 1876 Mary and Alfred became engaged and they were married the following year. Due to limitations on marriage for Cambridge Dons at that time Mary and Alfred relocated to Bristol, where Alfred was offered a post. Together Mary and Alfred wrote the Economics of Industry, which was published in 1879 under both their names. The book was highly rated by John Maynard Keynes and other leading Economists of the day. Alfred, however, disliked the book and allowed it to go out of print. There was no evident protest from Mary about this. Later Alfred's own seminal work, Principles of Economics, was published in 1890 under Alfred's sole name. However, we are in possession of one of the proof books and we can see how much Mary contributed to the editing of this great work from her handwriting in the margins.

Take a look at a digitised proof book of Principles of Economics in Cambridge Digital Library here:

When Alfred died in 1924 he left many of his books and donated much of his money to the library. Mary acted as volunteer librarian and looked after the collection for nearly 20 years, until she retired at the age of 87.

Throughout her life Mary enjoyed painting and produced a bound volume of watercolours, which was passed to the Marshall Library for safe keeping. 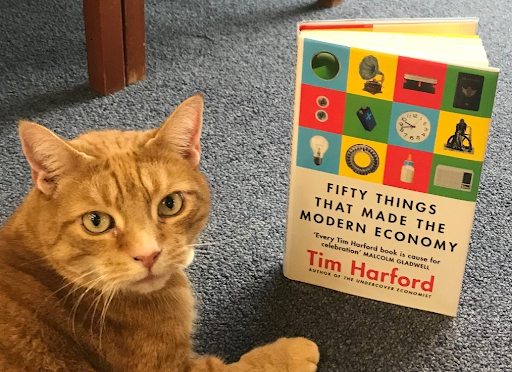 The Faculty do not mind if you use other referencing systems, as long as you are consistent. However, if you are new to referencing it can be really useful to start with this simple system. On the right hand side of the page you will see some clickable links, which show you exactly how to set out a reference for a particular type of resource 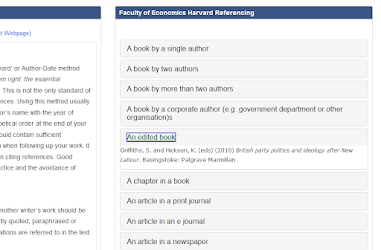 There is also a link to the Cite them right website, which has even more examples, videos and explanations about this Author-Date system. 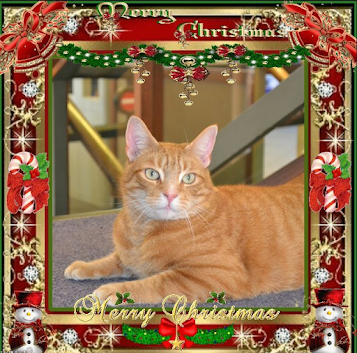 We hope you have found Jasper's Twelve Christmas Tips really useful - Happy Christmas from Jasper and all the Marshall Library Team! 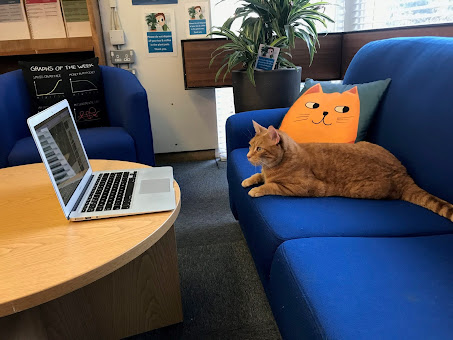 The Study Skills Libguide page has everything you might need from Copyright advice, creating a Conference Poster, Good Academic Practice and Avoiding Plagiarism, Reflective Practice through to more specialist advice such as how to do a Systematic Review, Text & Data Mining and Reference Mangement. There are also Reference Management guides for particular software such as Mendeley and Zotero.

This could be really useful over the Christmas Vacation when you may be working on your own independent projects or essays. 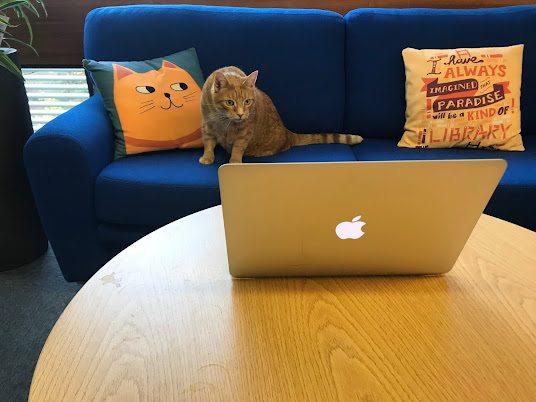 Why not just use Google to find information?

Problems with just googling information include not seeing all the information, data and literature available. You need to search in various places to get a good impression of work already done on your topic. Jasper recommends searching for scholarly information on Google Scholar

It is advisable to set your Google Preferences in Settings before you start, to make sure you do not miss out on full text links to Cambridge subscribed electronic resources e.g. journal articles. To do so click on the three lines at the top left of the Google Scholar screen to open up the Google Scholar menu - scroll right to the bottom to Settings 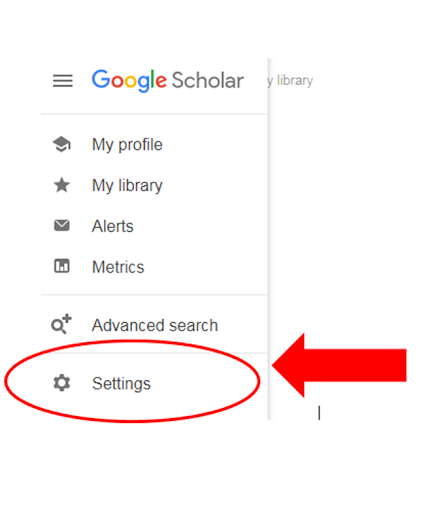 From the Settings Menu go to the Library Links option, third option down the list.

Make sure you turn on cookies to retain settings on your devices and then click the blue Save button.

Now when you search Google Scholar if Cambridge has access to the articles that come up you will be able to click straight through for Full Text Access!

Looking for data for your own independent project, dissertation or research? At Marshall Library we subscribe to a variety of Macroeconomic, Microeconomic and Financial datasets. We also curate lists of free to access data. We also have bookable Live Financial Bloomberg and EIKON data terminals at the Marshall Library. 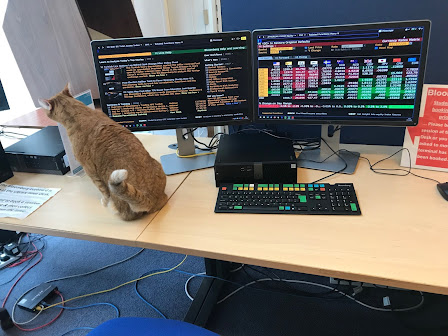 Here is a list of datasets, split by Microeconomic, Macroeconomics, Finance and Statistics on the Marshall Library website: https://www.marshall.econ.cam.ac.uk/onlineresources/economic-data

You will also find a link to Data sources for replication studies from this page.

If you know what dataset you are looking and want to know if it is free to access for members of Cambridge University go to our A-Z list here: https://www.marshall.econ.cam.ac.uk/z-datasets-list We have over 60 subscribed and free-to-access datasets on this list. The left hand column lists the datasets or sites by name in alphabetical order. The middle column tells you about the database or dataset and the right hand column tells you whether access is unrestricted or if you need to set up an account/register/contact Cambridge Judge Business School etc. 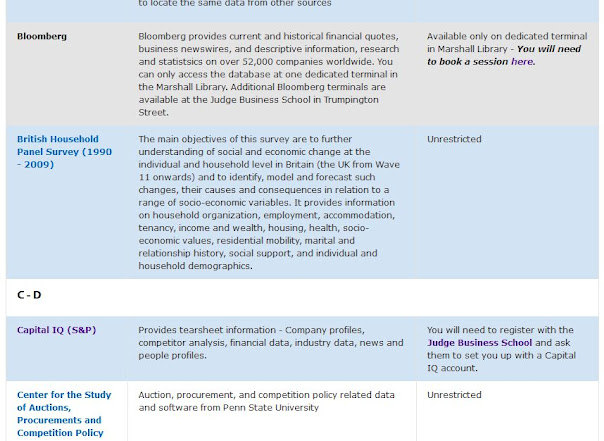 If you know you would like to use the Bloomberg or EIKON terminal please book using our booking form here: https://www.marshall.econ.cam.ac.uk/contactus/eikon-bloomberg-booking-form
Please describe the type of data you are looking for - name, time series, frequency, date range etc. 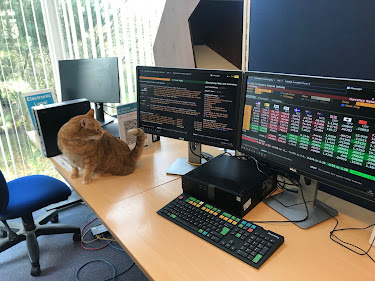