Fear not, this is not a Sound of Music-inspired farewell song or poem. However, as I’m trying to tie up loose ends, and tidy up my to-do list, inbox and desk, I’m just looking back a bit – before the end of my last full day at work at the Marshall (30 September 2015), after 1 year, 9 months, and 28 days (or 667 days and 8 hours if you prefer; I used a nifty online tool to “calculate” this!).

One of my favourite things – also pretty unusual – was the annual visit and tending to Alfred Marshall’s grave; my colleague, Simon Frost, informed me that this had already been a tradition: the Marshall Library staff going once a year to pay homage to the very gentleman without whom the library would not be what it is today. A minor detail was that the tradition had lapsed for about 21 (or more) years prior to the summer of 2014, but for Cambridge that’s a minor hiccup in a tradition usually measured in centuries. I have to admit though that a) it helps if you are a keen gardener, or b) like to have an outdoor picnic (which happens afterwards). This year’s event was made all the more memorable by being thoroughly drenched on the way back to the office/work, and that I will never forget this thought-provoking shower!

Another activity I had never done before but which turned out to be fun, was to develop – with strong input from Simon and the team – a document of sponsorship opportunities at the Marshall Library (our approach and final version also benefited hugely from the input of Laura Greenfield, a colleague at the UL). Even though none of the potential sponsors we approached at the annual Economics Careers Fair [link only works with a Raven user name and password, i.e. for current members of the University] were that keen, and none ended in sponsorship, it was useful to think of potential ideas for improving our provisions and services, if only we had external funding. It was fun to consider what potential partnerships the Library could engage with, with organisations and companies. 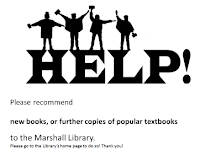 Finally, my initial idea of some guerrilla marketing, to create a stronger awareness amongst students and lecturers that the Marshall Library is very happy to receive recommendations for new books, or more copies of textbooks, resulted in Simon’s suggestion to approach lecturers with the idea of including our PR slide and flyers in their lectures. Again, our colleague Lisa provided the memorable visualisation here of our “cry for ‘HELP!’”.
There are a couple more things I could bore you with, such as the Focus Group we convened, and that thanks to this group of students our Social area now has breakfast bar-type tables and chairs (which are very popular in term time); but in the end, I promised myself to keep this short.
If you are interested in following up on the Sound of Music reference after all, here is a link to the video https://www.youtube.com/watch?v=0IagRZBvLtw

This is the second year we have asked our users for feedback on the Marshall Library via a Survey. This year saw a great increase in Part I students replying (up 10%!), but this goes with a decrease in participations from all other students. Whereas the small increase in number of respondents by 1%, to 24%, is positive, and maybe above response rates for similar surveys, it means that we are not being given a full mandate to follow some of the quantitative questions. However, the following will aim to present some of the noteworthy trends. For a fuller picture, please look at our Marshall Library 2015 Survey Highlights at Piktochart.

63% of all undergraduate students who responded claim to visit the Library twice or more per week (up by 5%). This is interesting, as the overall book borrowing (as for most libraries) has decreased, yet the number of renewals has gone up by 45% for the academic year 2014-15! When we take the students’ word for this activity, the overall trend of lower book borrowing is continuing:
Our total number of visitors (gate figures are up by +15%, compared to 2013-14) also backs up the students’ statement that they continue to use the Library as a place of study, and that this function of the library remains to be very important. Naively, one could assume that each student having a college library, and that the Marshall being in close proximity to the UL and other medium to large libraries, such as the Squire Law Library and Seeley History Library, would mean that students are not too fixated on being in their ‘home’ Library, but it seems that a lot of Economics students prefer studying with their peers. For those who are not sure where “home” is: SpaceFinder might be useful.

There is definitely a fan-base for us as a Library, which is maybe indicated by the more than 70% of respondents who say that they have used the Social Area in the Marshall at least once a month or more often. Our increases in opening hours from 54 to 67 hours per week (during term time, 2014-2015 compared to the previous academic year) got a big stamp of approval: 76% of students (up by 24% from 2014) believe that the opening times are okay (apart from 24/7 libraries, most libraries will probably get complaints about their opening hours). Us buying a significant amount more of textbooks between January 2014 and October 2014 has also led to now 74% of students being ‘very satisfied’ or ‘satisfied’ (up 8% from 2014).

When it comes to the crucial textbooks and how happy students are with these being available to them, again 74% of respondents are happy, but it is noticeable that in 2015 no one stated that they were very dissatisfied – an acknowledgement, perhaps, that we are providing significantly more copies of most textbooks than most college libraries. We are always, however, happy to have further suggestions, either for more copies of textbooks (if such copies are available), or of books which might be useful for someone’s dissertation or research (either email us, leave a suggestion form at the Issue Desk, or fill out our online form at http://www.marshall.econ.cam.ac.uk/contactus/book-purchase-suggestion-form)

There are many more observations which could be made – also relating to ebooks usage – but I cannot end this post without busting a myth about student library use in 2015: nearly 80% of respondents ‘disagree’ or ‘strongly disagree’ with the statement that they ‘do not consult physical books much any more’ – making a bit of breathing space for traditional library provisions and librarians:


If you found the above interesting, you might also want to read the 132 individual suggestions given by respondents – and our comments.