The Return of Alfred Marshall’s Book V, Ch.VII of Principles of Economics (annotated) from Japan

Prof. Shoichiro Uemiya visited the Marshall Library Archive on 9 March, 2017 to return a book that belonged to Alfred Marshall. The book appears to have been in Japan for some time and possibly since the 1920s.

As Prof. Uemiya  explains in his own words:
“I am an Emeritus Professor of Kobe University in Japan. My major field is the history of economic thought. I studied for a year (1977-78) as an Honorary Research Fellow under the late Prof. R.D.C.Black at Queen’s University, Belfast. 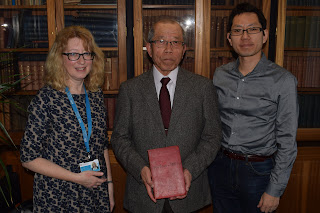 Just before my retirement in March 2012 Mrs. Taeko Minakata, the wife of my supervisor the late Prof. Kanichi Minakata (1923-1985), asked me to return this book, which is part of Marshall’s Principles of Economics. The book contains pages with bound-in pages of written script – possibly in the handwriting of Marshall himself. Her husband told her that he received this particular book from his old-time supervisor Prof. Yasaburo Sakamoto (1894-1981). Prof. Minakata’s major field was Marshall’s Economic Theory. He came to Cambridge for a year (1962-63) to study and stayed at St. Edmund’s House. However, Mrs. Minakata has no idea when or where Prof. Sakamoto got the book. He did travel between 1919-1927 in England, France, Germany, Italy and Switzerland.” 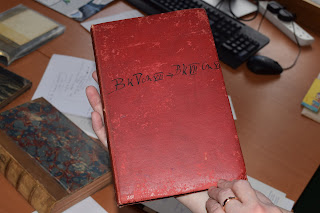 The book comprises Book V, Ch. VII  pp. 449-610 of Principles of Economics. Many of the pages include handwritten insertions in coloured pencils and ink. There is also a stamp showing 15 Jan. 90, University Press, Cambridge. Clare Trowell, Marshall Librarian and Simon Frost, Deputy Librarian can confirm that the inserted pages are in Marshall’s handwriting as the Library Rare Books collections contain many examples of Marshall’s handwriting and it is clearly recognisable. 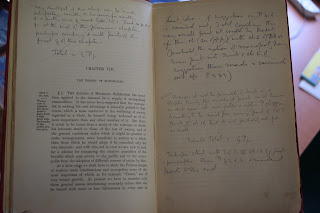 The Marshall Library Archive contains several photographs, including an intriguing picture of Mrs Mary Paley Marshall entertaining a Japanese visitor and his wife at her house, Balliol Croft, in 1928. This visitor is Prof. Tsunao Miyajima (1884-1965) who translated the Memoirs of Alfred Marshall (1925) into Japanese. Between 1919-1928 Prof. Miyajima was Prof. at the Kansai University, Osaka. In 1928 he also visited France. Between 1948-1952 he was Chief Director of Kansai University. There does not appear to be a link between Prof. Miyajima , Prof. Sakamoto and the mysterious annotated book that has just been returned to the Marshall Library Archives. 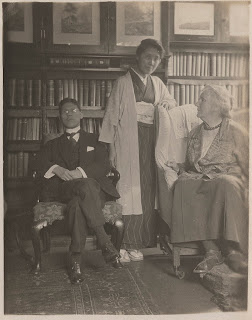 We plan to catalogue the returned book as a Rare Book and make it available to scholars of Alfred Marshall as soon as possible. 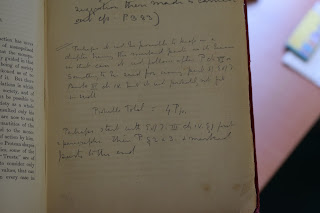 Prof. Uemiya also kindly donated a copy of his translation of the work: