I was very privileged to be invited to attend the launch of the University Libraries new exhibition:
The Rising Tide: Women at Cambridge, which marks 150 years since the founding of the Cambridge's first women's college. It tells the stories of lives of women at Cambridge and the fight for equal educational rights. 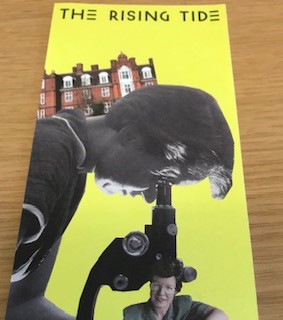 You can read more about the exhibition, curated by Dr. Lucy Delap and Dr. Ben Griffin on the Cambridge University Library website.

I was lucky to be invited to the launch as the Marshall Library has contributed to Rising Tide exhibition by lending our Roger Fry portrait of Mary Paley Marshall 1850-1944, the first librarian, benefactor and founder of the Marshall Library of Economics. I am very proud, as Marshall Librarian, to see Mary hanging in pride of place along with other key portraits of Cambridge women in the University Library main corridor. 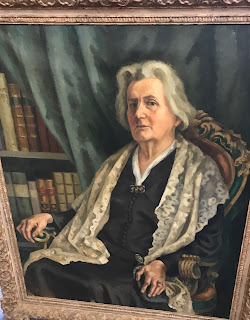 Mary Paley was one of the first women to study the Moral Sciences Tripos at Newnham College, as well as one of the first to take the exam. She was taught by Alfred Marshall, whom she later married. She was also the first woman lecturer in Economics. She could not graduate, of course, and, unfortunately died before women were granted this right at Cambridge in 1948. John Maynard Keynes and Austin Robinson commissioned this portrait by Roger Fry in honour of her work for the Faculty of Economics. She sat for this portrait in Keynes' rooms at Kings. This is actually the second portrait, which was accepted. The first portrait painted by Roger Fry was not a good enough likeness! 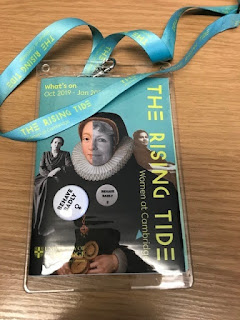 It was a great evening with some excellent speeches, Dame Jocelyn Bell Burnell gave a very moving speech about her discovery of pulsars, while studying for her PhD at Murray Edwards College (then New Hall) at Cambridge. It was also a wonderful opportunity to meet some amazing Women at Cambridge, past and present. I particularly enjoyed the story behind the "Behave Badly" badge: Lisa Jardine, a renowned historian who studied at Newnham College 1963-73 used to hand out these badges to women friends - those she though would benefit from them. One such badge was worn by Jane Tillier, first laywoman chaplin at Jesus College in 1984 and Jane used to wear it under her robes. The exhibition is on at the University Library until January 2020 and has involved Libraries and Archives from all over Cambridge - I thoroughly recommend visiting it.