(Re-blogged from EJOURNALS@CAMBRIDGE)
The University of Cambridge now has access to the Encyclopedia of political thought.  The Encyclopedia can be accessed via this link:
http://ezproxy.lib.cam.ac.uk:2048/login?url=http://www.encyclopediaofpoliticalthought.com/
The Encyclopedia examines the history of political thought, contemporary political theory, and political philosophy. The entries range in size from shorter definitions and biographies to extended treatments of major topics and traditions. Tracing the evolution of political thinking from antiquity to the present, the scope of this unprecedented resource emphasizes the richness and diversity of the field’s traditions.
“A central problem for constitutionalism is the enforcement of constitutional norms. In the USA, there is no effective dissent from the practice, established in 1803 by Chief Justice Marshall in Marbury v. Madison, that courts in appropriate cases may overturn statutes as unconstitutional. But the idea of a constitutional court, though gaining ground around the world, is not a necessary component of constitutionalism. Legislatures and executives may feel bound by constitutional norms, even though they have the formal power to disregard them. Not since 1707 have British monarchs vetoed legislation enacted by parliament, though they have the “legal” authority to do so. In the USA, decisions to impeach and convict federal officials, such as the president and judges, are wholly in the hands of Congress under the constitution itself, but the impeachment power has been used only sparingly and when, occasionally, it was misused, the Senate refused to convict. That said, it is also indisputable that constitutional norms can change so that what was once thought to be perfectly plain and acceptable to one generation becomes unthinkable, as a matter of constitutional law, to another. The most spectacular example in American history is the Supreme Court’s change of mind on the question of racial segregation from its 1896 decision in Plessy v. Ferguson to its decision in 1954 in Brown v. Board of Education.”
— Lieberman, J. K. 2014. Constitutionalism. The Encyclopedia of Political Thought. 730–732 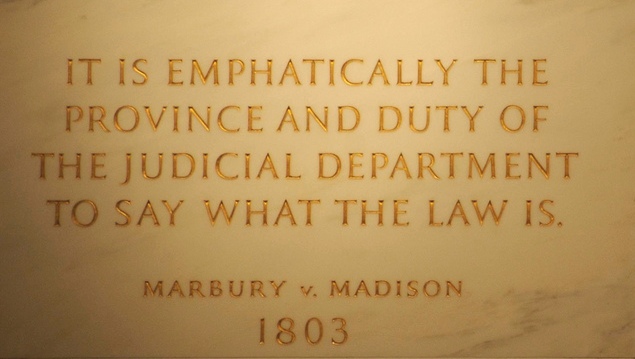 Inscription on the wall of the Supreme Court Building from Marbury v. Madison, in which Chief Justice John Marshall outlined the concept of judicial review
Posted by Clare Trowell at 09:12