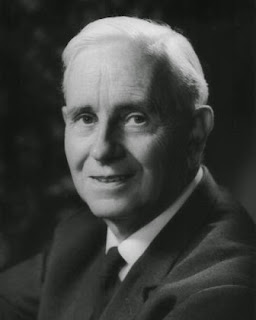 After leaving Killingholme Austin was posted to RNAS South Shields where, between July and October 1918, his duties involved testing flying boats for airworthiness and then delivering them to locations across the UK.

The first flying boat that Austin tested and delivered was N4240, a Felixstowe F3, which he flew south to RNAS Cattewater near Plymouth in Devon. 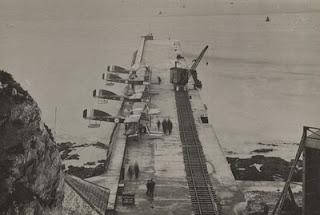 His next delivery involved flying  Felixstowe Porte Baby, N9807,  north to Houton Bay, which was the RNAS station for Scapa Flow in Orkney. These were extremely long delivery flights - the flight from South Shields to Cattewater could take over 8 hours - and Austin always had to stop to refuel - at Killingholme if going South or at Dundee if going north. 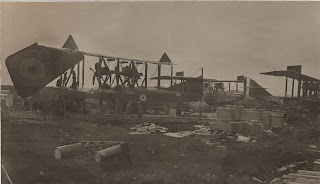 Felixstowe Porte Baby No. 9807 after it was wrecked in a gale at Catfirth (Austin Robinson Papers, loose photo in Box 131)
Interestingly Austin states that the flying boats that were being assembled at South Shields and that he was testing had, initially, been built at Preston - on the other side of the country in Lancashire! Although appearing at first to be rather improbable this was indeed the case and indicates the way in which aircraft at this time were being built.  Dick, Kerr & Co. - originally a builder of trams and electric trains - had been contracted by the government to build flying boats in their Strand Road works in Preston. They received flying boat hulls from nearby boat builders and then constructed the rest of the aircraft and assembled it. The wings would then be removed and the flying boat transported by road on a steam lorry to South Shields, a journey which took 3 days.

In October 1918 Austin was posted to the naval ferry pool in London and was involved in ferrying flying boats from the locations where they were being constructed - notably Hythe on Southampton Water and Cowes on the Isle of Wight - to Felixstowe and a variety of other RNAS stations.

After the Armistice  Austin was sent to Rochester where he began testing flying boats built by Shorts and then delivering them to Felixstowe. He remained their until April 1919 and, in his words '... got to know Shorts very well indeed' (EAGR Papers 2/9/4). The Robinson archive contains a large number of photographs that he took while at Shorts - of flying boats being constructed, tested and launched. Many of these pictures provide fascinating insights into the construction of these early aircraft and also clearly indicate the importance of women in industry by this time. A selection of these photographs may be viewed on the Marshall Library web site. 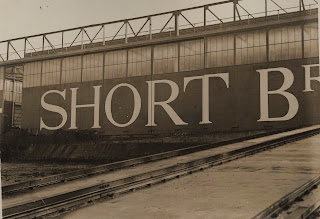 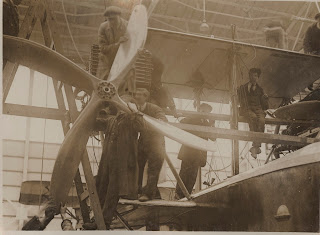 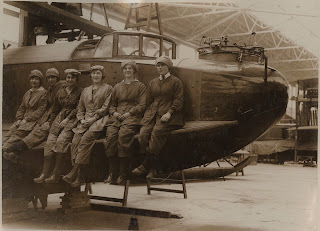 While at Rochester Austin worked closely with Short's chief test pilot John Lankester Parker to determine the airworthiness of the flying boats being produced there. Rejection of a particular aircraft was a serious matter as it would mean that Shorts would not get paid for it and this happened on one occasion when a Felixstowe F3 proved to be 'intolerably tail heavy' (EAGR Papers 2/9/4). The problem was referred to the aeronautical engineers at the Felixstowe Seaplane Experimental Station who suggested raising the entire tailplane by 4 inches and, once this was done, '... the boat was perfectly comfortable to fly' (EAGR Papers 2/9/4). Austin observed that 'It taught both of us a lot that we did not know about some of the more curious aspects of aircraft design' (EAGR Papers 2/9/4).

Austin's last flight as a flying boat pilot occurred in April 1919 when, on the suggestion of Oswald Short, he took his younger brother Christopher on a flight in N4033, a Felixstowe F3. The flight was uneventful and the following day he travelled to Cambridge to begin his studies as an undergraduate at Christ's.