Joan arrived as an undergraduate at Girton College, Cambridge, in 1922 to read for the Economics Tripos. She had studied history at school, but chose Economics for her degree, as she wanted to understand the causes of poverty and unemployment. She gained a 2:1 but was denied a degree, as this right was not granted to women at Cambridge until 1948.

In 1926 just two months after her marriage to Austin Robinson, a fellow of Corpus Christi, Joan and Austin sailed to Bombay where Austin took up the post of tutor to the Maharajah of Gwalior. 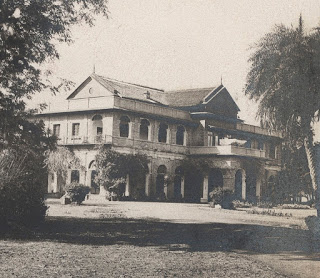 Together they led a privileged life, although Joan was not always comfortable at the society events where she was expected to generate small talk. Joan assisted Austin in the drafting  of a review of the relations between the Indian states and the British Crown and was invited to London for the presentation of the Princes' case. Meanwhile Austin resigned from his post as tutor and was reunited with Joan in London where they drafted considerable portions of a book on population. The drafts remained unpublished, as they then moved back to Cambridge where Austin took up a lectureship in 1929. 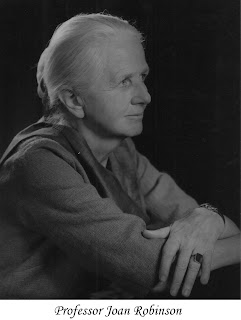 Joan had to wait until 1934 for her first university post as an assistant lecturer. Although she was not appointed as a teaching fellow, Joan gave supervisions to students from various colleges. At this time she came to know Cambridge economists, including Maynard Keynes, Piero Sraffa, Maurice Dobb,Gerald Shove, James Meade, Dennis Robertson, A.C.Pigou, and of course Richard Kahn, Keyne's favourite pupil and Joan's most trusted critic. Joan had an incisive mind, and she relished the intense discussions held with colleagues in the faculty. Joan joined a small group of scholars referred to as "The Circus", which was formed by Sraffa in 1930 to discuss A Treatise on Money by Keynes. With reference to the group Joan wrote, "Keynes, and all of us, thought that [it] was of great and serious importance to get the argument right; taking credit for it was quite a secondary matter." In 1962, in correspondence with Nicky Kaldor, Joan wrote,  I value very much the work gang and I think that we all do each othjer more good working as a team thatn any one can by having prioriy or "all my own unaided work".

Joan's first publication appeared in 1932 in the form of a pamphlet Economics is a Serious Subject, followed by her first major work The Economics of Imperfect Competition in 1933. 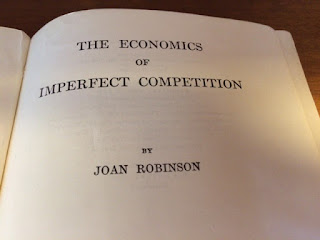 In 1937 she was appointed a lecturer, a reader in 1949 and a professor in 1965, succeeding Austin. Throughout her academic career she worked ferociously, writing books and journal articles, as well as reviews of articles, both favourable and critical. She wrote prolifically about the new ideas being developed by Keynese and contributed much to the debate of employment theory, and the theories of money and international trade. During the Second World War Joan researched Marx's Capital to assess the impact of his economic theory on orthodox economists and Keynesisans.

Much of Joan's writing in the post-war years concerned development issues. She was fascinated by the Chinese experiment, travelling there eight times, as in her opinion China demonstrated how to implement a planned economy, in both urban and rural communities. A theme which recurred in her later years was her vehement opposition to war and the arms industry. Her last public lecture was a criticism of the nuclear arms race: "...never before has so great a proportion of economic energy and scientific study been devoted to means of destruction."

As summarised by Paul Samuelson, Joan sought to find "true socialism", helping to promote justice and equality in many different societies she had encountered throughout her life. She was an original thinker, a passionate seeker after truth, and one of the greatest economists of the twentieth century.