The Economic Consequences of the Peace by John Maynard Keynes, 1919 Part I: Early Publication History by Catherine Piner

The first print run of The Economic Consequences of the Peace hit London at the end of 1919. 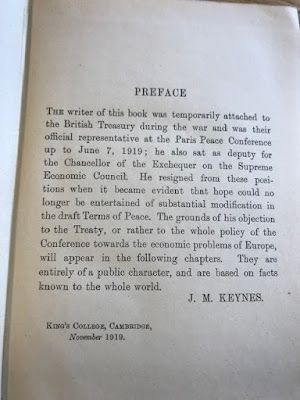 Within six weeks Keynes was working with American publisher Alfred Harcourt of Harcourt, Brace and Howe Inc. on an American edition. In a letter from Keynes to Harcourt on the 29th of January 1920, Keynes explains the unanticipated enormity of the response to his work. By this point, 8,000 copies had been sold in England and 15,000 had been printed in all. Internationally, there was a ‘strong demand’ for the translation rights in ‘French, Italian, German, Dutch, Hungarian, Swedish, Norwegian, Polish, and Russian.’[1] Given the response to his work, Keynes was writing to express his regret at not making the first American print run larger than the planned 4,000 copies.

Keynes was certainly right about the American market. His royalty statements for the first six months of American publication reveal incredible success. By the 30th of June, 38,403 copies had been sold in America. In terms of royalties, Keynes earned $16,401.31.[2] His publisher, Alfred Harcourt, clearly anticipated the continuation of this success; in a letter on May 5th, 1920 Harcourt informs Keynes that they just had another 50,000 printed with 4,000 bound initially.[3]

While not as robust in terms of total copies as the publication’s American success, the work continued to do exceedingly well in England. Within weeks of the book’s publication, friends, organizations, and strangers were writing to Keynes asking him to publish a cheaper edition of the work. On January 16, 1920 the secretary of the Women’s International League, K.E. Royds, wrote to Keynes asking him to ‘arrange to have a cheap edition […] brought out at the earliest possible moment.’[4] Thomas F. Tweed of the Manchester Liberal Federation wrote asking for a cheaper and shortened edition. On January 27, 1920 he wrote:

‘It is fair to assume that you wrote the book with a more or less propaganda purpose. Its price, however, makes the matter of popular circulation almost prohibitive, and I am instructed in this first instance, in quite an informal way, to suggest to you the writing of an abridged version of the “Economic Consequences” which might be about half its length and published at a popular price.’[5]

Others, such as Archibald Rowntree, wrote offering to help finance a cheaper edition, saying that if ‘any help is needed by way of guarantee in order to get it at a really low price, I think two or three of us here would be only too glad to help in this way.’[6] Harold Storey of the Liberal Publication Department similarly offered financial assistance should it be necessary, explaining that ‘Many of us regard your book as so much the mouthpiece of a great cause, that I do not think there would be any difficulty in spending money in order to get it quickly before a larger public.’[7]

On the subject of a cheaper edition, Keynes eventually worked with G.D.H. Cole of the Labour Research Department to release a special cheaper edition of 10,000 copies. By September 1st of 1920, there remained only 170 copies of the 10,000 unsold.[8] A photograph of the Marshall Library’s copy from this edition is below. The book is on display at the entrance of the Marshall Library for the next few months for those interested in a closer look. 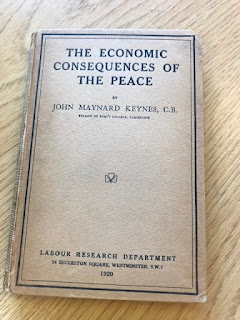 Within a year of publication, the spread of Keynes’ work was so broad that he had to cancel plans for 2,000 copies of a Czech translated edition. At this time, the spread of the German edition throughout Czechoslovakia made it unprofitable to translate further.[9] Clearly, neither Keynes nor his publishers predicted this work’s universal popularity.

It is important to keep in mind that these publication figures give just a glimmer of the work’s popularity; for every book sold it is impossible to say how many times it was read and passed between individuals. While the publication figures certainly tell a story of the work’s unanticipated popularity, the reasons for and nature of that popularity cannot been seen in these figures. Future blog posts will begin to address just this.

Special thanks to the Archive Centre and King’s College, Cambridge for use of and help with their collection of Keynes’ correspondence.